Former anti-war protestor & spokesman, Atlantic Life Community; Jailed in 1994 for destruction of government propertyPETA’s vice president of International Grassroots Campaigns, Bruce Friedrich, nakedly exposes his views — and everything else. Arrested in London in July 2001 for streaking Buckingham Palace with the words “go vegan” painted on his body, Friedrich specializes in confrontation. He threw a glass of water at London’s visiting mayor in Washington, DC when he didn’t like the mayor’s answer to a question about pigeon food. Friedrich also spent over a year in prison for attacking an Air Force fighter plane with a hammer.

Friedrich believes sport hunters should be viewed “with the same revulsion we presently reserve for Nazi doctors and slave traders.” He spearheads PETA’s absurd “Jesus Was a Vegetarian” campaign. Friedrich has even denounced teenage animal-rights activists who dare to question the appropriateness of violent protest.

Timothy McVeigh “should not be allowed to take even one more life,” wrote Friedrich, urging the terrorist’s warden to serve the condemned prisoner only meatless meals. When McVeigh opted for a vegetarian “last meal,” Friedrich proclaimed that the mass murderer’s decision to abstain from meat “groups him with some of the world’s greatest visionaries, including Albert Schweitzer, Gandhi, Leo Tolstoy and Albert Einstein.”

Bruce Friedrich is connected to the following organizations: 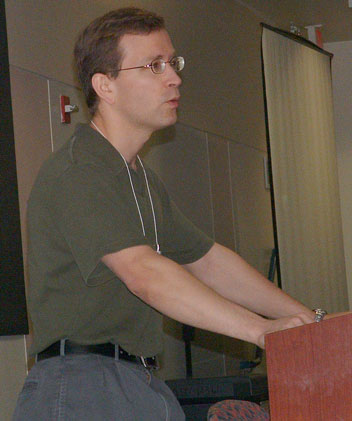